The Young Hustler​
​My name is Kristian Kabuay and my entrepreneur journey started even before I knew what the term meant. The first time I sold something was in the 2nd grade when I sold candy to my classmates my mother bought for me. This lead to selling toys and comic books I didn't want anymore. As I got older, I started playing sports and collecting baseball, football and basketball cards. This sustained me from junior high to high school. I never had to get a typical teenager fast food job or ask my parents for money.

The turning point was when I asked a card dealer at a convention how he got so many boxes of sports cards. He told me he orders direct from the factory and told me that one would need a resale license. Later that evening, I asked my dad if he had a resale license. He did and I promptly made a copy and mailed a letter, since this was pre-internet, to card companies. A couple weeks later, I received an information packet and order form. I promptly gave my mom a few hundred dollars to my mom to write a check for my 1st bulk order. If I recall correctly, a box of cards was around $20 wholesale and would retail around $45-$50 or $2-$3 for a pack of 10 cards. When the case finally arrived, I broke down the boxes and filled my backpack with cards I would sell in school. While the school business was ok, I wanted to take it to the next level and sell at conventions like the big boys. My 1st convention was on a Sunday at the local Holiday Inn. I had my dad drop me off with boxes of cards and a display case. I was a 14 year old kid who had no clue what I was doing.

​My approach to business at that time was sell cheaper than the other dudes. I scoped out the competition and undercut the competition by 50 cents a pack and $5 a box. It was many years later that I learned that overhead was built in to their retail price. I of course, had very little to no overhead. I think it was safe to say that they hated this kid who was undercutting everyone. Word spread in school that I was the guy to look for if you wanted to sell your cards. One day, my classmate shows me these old cards from the 1950's he found at home. They were in bad condition but I knew they were still worth something. This was my 1st test in business ethics aaaaaand I failed. I got the 4 cards for $20 after asking him what he wanted for them. I resold them for around $750. My 2nd ethics failure was when I was doing an event at a mall where I was the one of the few dealers who had these highly sought after newly released premium basketball cards. While the other dealers were selling these pack of cards for $3.50, I sold mine for $2.50 because I took all the good cards out. The night I received the case, I did my usual routine of opening 1 box and going through a clockwise pattern. I'd start with the top left corner, then the top right, bottom left and ending the bottom right. As I got to the 3rd row, I started to notice a pattern the way the cards were packed. Basically, if I opened a back with card #02, the next pack under it would be card #03 and so on. Since I had a list of all the card #'s, all I had to do was open 1 pack from the top of each quadrant and I'll know what was in the whole box. I repeated this pattern for every box in the case and pulled out all the good (expensive) cards and sold the crap. I did the card business until I graduated high school and moved to the Philippines where I tried to start a similar business but failed and got ripped off. Some of the list of failures include an online business directory, a zine and CD importer. I ended up working at a model agency and internet startup.

The Accidental Business
I left the Philippines as the call-center industry was just starting. I wanted no part of that so I left. When I came back to the US, I ended up working at a call-center getting yelled at for 8 hours a day by rich people who wanted an explanation why their $1,000 ottoman was late. While I was good at my job, I was miserable and missing the Philippines. I contacted a tattoo artist named Aleks Figueroa and  talked about a tattoo in the nearly extinct prePhilippine writing system. After my tattoo healed, I uploaded a photo on MySpace and Friendster to show to it off to my friends. People started asking me for help to translate their names and words. I would write it out, take a photo and send it off to them. After a couple months, the inquiries started to grow and come from strangers. That's when I decided to try an experiment and add a $5 paypal link for people to order a translation. To my surprise, it worked! $5 became $10 and $10 became $15 and I had a little side hustle going on to add to my day job that didn't pay much.

​It was a life changer! My next step was to move on from MySpace and Friendster to dedicated websites and online store. On the websites I would write articles about the writing system and became a subject matter expert that lead to publishing books, lectures in universities around the world, TV interviews, consultations, event production and collaborations with various companies. Not only has this business been financially fulfilling, I've been able to travel the world, make long lasting friendships and be part of something bigger than myself. 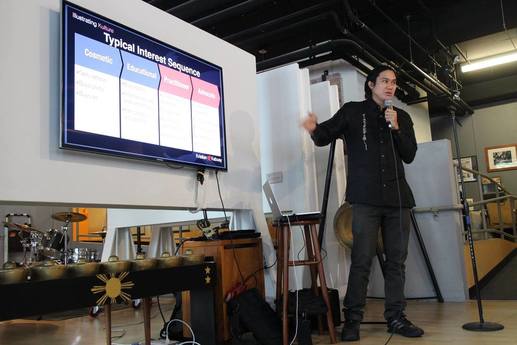 The Birth of the Entrepreneur Deck
As part of my continuing education to grow my business, I've studied and tried many strategies and almost every gimmick by internet marketers. The ones that help transform my business were the Lean Startup and Business Model Canvas methodologies. I've also been able to take this approach to corporate environments at my day job as a product manager. It's become second nature to me. Next to my cultural work, small business has become a 2nd passion.

On Saturday mornings, I make it a routine to wake up early and have a pot of tea and an almond croissant at Vive la Tarte in San Francisco. One day, I met my friend/client, Marion Pernoux to talk about her esthetician business and how she want's to start an online school for passive income. I get excited because, that's my shit! I go into the Lean Startup and Business Model Canvas mode and start firing off questions, showing the canvas, Trello, etc. While the conversation was good, I felt that she was getting lost.

As I was walking home, I was bothered that I overwhelmed her. Before we started talking business, I showed her some flashcards I created for teaching the prePhilippine system and she got it. If I can teach the basics of a foreign writing system with the cards, why can't do the same for business? Correction, not teach business but start the discussion about a business someone is THINKING about starting. The cards would serve as a tool to discuss important subjects before spending a large amount of time and money.  These discussions can also apply to existing businesses. In my next meeting, I did an experiment and broke down my big list of questions to focus on 3 topics to simulate the flashcards method. These were 1) Her personal story, 2) Who her potential customers (customer segments) were and 3) Their problems (problem statement). This method resonated with her and was an initial validation of spearheading this project.
With my cultural business, there's a strong social community commitment so why not implement that with Entrepreneur Deck? My first thoughts floated towards the startup scene since technology is one of my passions, I have a foot in the door and I'm heart of it in San Francisco but there's communities that have limited access to resources. Just in the area I live, there's many orgs that can use a tool like this. So what does that mean? Donating sets to underserved communities, workshops and events. Spotlighting entrepreneurs in the blog that don't typically fit the mold of a startup. This is just the start....